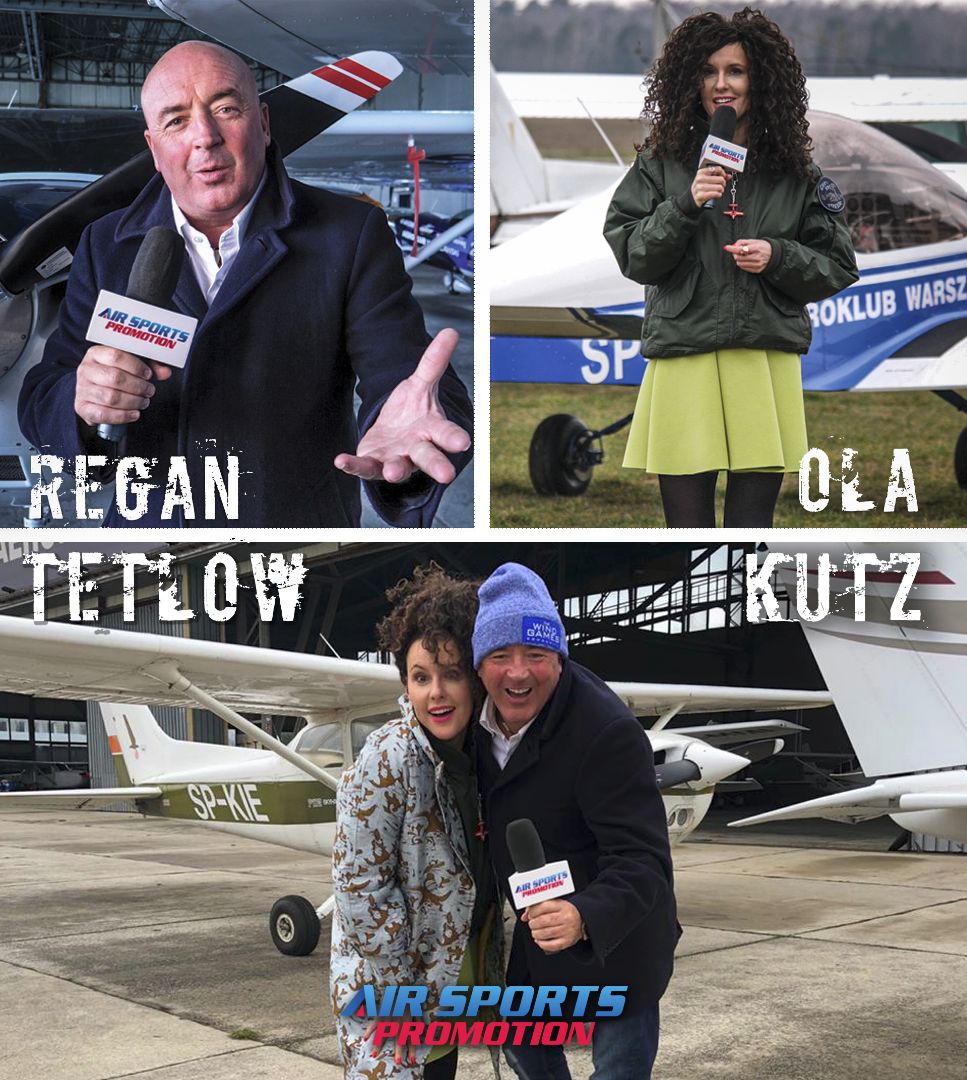 We are extremely happy to present our hosts – Aleksandra Kutz and Regan Tetlow!

Artist, radio and press journalist. Involved in charity for the benefit of raising the quality of life and raising public awareness - including aviation, what can be seen in Air Sports Promotion productions and during air shows. Her new movie, where passion for flying is also revealed, will be soon in cinemas. She races and flies. The only woman in the international aviation plebiscite „Cumulusy”chapter. A valued person in automotive and art. world, rides a motorcycle, has an enduro license and is a car rally driver. Known to viewers from such TV programs as "Ola w trasie" or "Najgorszy polski kierowca" and "Przyjazne motocyklistom" and many other programs and lectures. Literary quarterly „Literacje” editor. European Skydiving Symposium spokesperson. She began her parachuting adventure under the guidance of master Arkadiusz Maya Majewski. High flights are her specialty!

TV presenter, actor, voiceover artist and skydiver with 9000 jumps under hist belt! Regan brings over 30 years of presenting experience in to our team. He has been anchor and main presenter for many FAI championships over the last 10 years including: Mondial Dubai 2012, The World Games Cali Columbia 2013, Sail plane Grand Prix Poland 2015, The World Air Games Dubai 2015, The World Games Poland 2017. Master of Ceremonies assignments have included: Parachute Industry Awards 2013 Daytona Beach Florida, Charlewars Indoor Skydiving Championships 2014, Windgames Indoor Skydiving Championships 2014-2020 in Spain, Vector Festival Film Awards 2011. Live events include: King of Swoop competition in Spain, Air Games at Charleswar 2014, SunPath Canopy Piloting Open North Carolina 2014, Swoop Freestyle Championships in Copenhagen, San Diego and Jeddah.
Regan competed in 4 and 8 way in the UK from 1997 to 2001 and won Bronze, Silver and Gold in both events. He said one day: “I am very lucky to be in a situation that allows me to follow my two main passions: skydiving and working a crowd. I have presented at some incredible events over the last few years and it is always a lot of fun. I like to bring my energy to others.”
Regan is also an IMDB listed actor with currently 7 movie credits and other acting credits include: 24 HOUR PLAYS Hyde Festival Theatre 2019 and 2018. CIRCUS FIESTA Dubai. IMPROV MAGIC theatre Saint Catherine Montréal PRINCE CHARMING Dubai. Lost at Sea Panto Dubai 2018 and Trouble in the willows Panto Dubai 2019. He has been busy with TVCs in Dubai for the last 5 years.
We are also proud to announce we are the official management agency for Regan Tetlow!
You will meet Ola and Regan during many aviation events in the nearest future, but please also monitor and follow our FB, YT, Instagram and Twitter profiles to be up to date with all new productions, reports, videos, fotos and news prepared by Air Sports Promotion crew.
Be safe, see you soon!